India became free from the British rule on 15th august 1947. Since then every year we celebrate this day as Independence Day of India.

15th August is a National holiday and it is celebrated as the biggest National festival all over the country.

Independence Day is celebrated by the people of all religions, cultures, and traditions with great joy and happiness.

Independence Day is celebrated in all schools, colleges, and educational institutes. The national flag is unfurled by the chief guests and then the national anthem is sung by all.

On this day, the prime minister of our country hoists the Indian national flag at the red fort in Delhi. Lots of people participate in this ceremony. 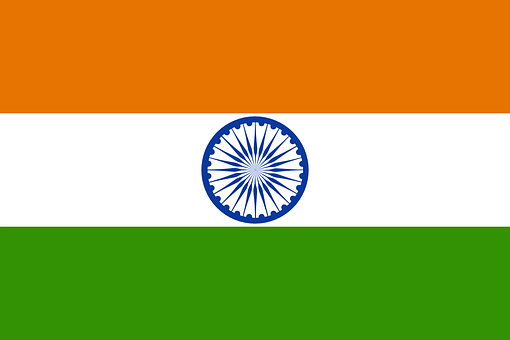 The Indian flag was adopted on 22nd July 1947 in the constituent assembly. It was designed based on the Swaraj flag by Pingalu Venkaya Garu.

The term ‘tricolor’ refers to the Indian national flag. It is horizontal; its ratio of length and width is 3:2.

It is with three colors in equal proportion. It has deep saffron, Kesari color at the top indicating the strength of the country. It has white color in the middle indicating peace and truth.

It also has dharma chakra which intends to show that there is life in movement and death in stagnation.

The dharma chakra is in navy blue color representing the sky and sea. It is taken from the abacus of Sarnath Lion Capital of Ashoka.

It has 24 spokes which represent :

The dark green color at the bottom indicates Fertility, Growth, and Auspiciousness of the land. The flag must be made of khadi.

Our national song is Vande Mataram. Which is taken by the novel Anandmath in 1882 written by Bankim Chandra Chaterji.

Vande Mataram was the greatest inspiration for our Indians during the freedom struggle. Vande Mataram was sung by Rabindranath Tagore for the first time in 1896 session of Indian national congress.

The music for the Vande Mataram song was composed by Jadunath Bhattacharya. Initially, it was written in Sanskrit and Bengali and it was translated in English by Aurobindo.

Our national anthem is Jan gan man. It is sung to drive patriotism, pride, and respect towards our nation and freedom fighters who sacrificed their lives for our freedom.

The national anthem was first written in Bengali by Rabindranath Tagore and the music for the song was also composed by Tagore itself.

Jan Gan Man song was adopted in its Hindi version in constituent assembly as our National Anthem on 24 Jan 1950.

The English version of our national anthem was composed by Tagore in Madanapalle in Andhra Pradesh at Besant Theosophical College.

Jan Gan Man was translated in Hindi and Urdu by Abid Ali. It should be sung in 52 seconds.

Our National Pledge is an oath of commitment for a superior cause for all the citizens of India.  It was initially composed in Telugu by Pydimarri Venkata Subba Rao in 1962 and later it was translated in every Indian language. It was first presented in school Vishakhapatnam in 1963.

Our National Pledge is at par with National Anthem and National Song but it is not adopted by the constitution of India.

Our national emblems include 4 Lions standing back to back symbolizing power, Pride, courage, and confidence.

It is adapted from the Ashoka’s lion capital in Sarnath. Below the lines, a galloping horse and a bull separated by a wheel dharma chakra.

Below it is written SatyaMev jayte. Which means ‘truth alone triumphs’. The quote is taken from the Mundaka Upanishad in Devanagari script.

India is the cradle of the human race.

India is the birthplace of human speech.

India is the mother of history.

India is the grandmother of legends.

India is the great grandmother of traditions.

I feel proud to be an Indian